We hoped that there would be opportunities in the summer months for eating lunch or dinner, maybe even breakfast, in the courtyard. When it came to constructing a pergola to provide a shady spot for this, I remembered the problem I had encountered with the posts for the trellis. This time I bought the type of support that fastens round the post with nuts and bolts. They had spikes which had to be hammered into the ground for a distance of about fifteen inches. I was extremely lucky in that I managed to avoid a drain which I hadn’t realised existed until Alan put in the new vent pipe for the septic tank. Had I put the first support in the place I had originally planned, the drain would have been smashed, no doubt immediately becoming another source of olfactory discomfort.

I planted another wisteria to climb up one post and a jasmine to climb a second. I had learned my lesson with the first wisteria, and these plants were bought in France. They, too, have shot up and sprouted forth in such profusion that I have to trim them nearly every time we visit the house.

Just as the plants on the pergola had got themselves properly established and were starting to flourish, a bombshell was dropped. It was Sue who alerted us to the potential problem, which meant that the plants and the pergola itself were in danger of being ripped out of the ground as a result of a law passed by the French government.

It was not that the government had taken an active dislike to either our pergola or the plants climbing up and over it, nor was it a matter of needing planning permission for such erections. The problem was the septic tank.

The government was concerned to see that all non-mains drainage systems, ie septic tanks, met minimum standards. Each commune was required to conduct a survey of all septic tanks in its area. Those tanks which were below the set standards would have to be replaced by a specified date, the replacement being carried out by government-approved contractors. A magazine article passed on by Sue indicated that the average cost was likely to be at least six thousand euros. And, from the information given in that article, we could see that our tank did not come up to the new, minimum standards.

However, there was an alternative for small plots like ours. We would need to have installed two huge, interconnecting tanks with no outlets at all. And these tanks would have to be emptied regularly by experts.

I could envisage the entire courtyard being dug up – probably in the height of summer. This would mean that we would not only face an enormous bill, but would be unable to let the house while the work was being carried out. And even if the contractor gave us both starting and finishing dates, you could bet he wouldn’t stick to them, so we would have to allow for at least another month of no lettings.

The article went on to say that we should expect a visit.

Time went by, and we had no contact from anybody. We were beginning to think that the people in the mairie were adopting the same attitude as the mouse had when I enquired about the need for a license to let the house as a gîte – a sort of ostrich approach whereby if they kept quiet, nobody from a higher authority would remember they existed. But that, it transpired, was not the case. The village’s annual report showed that houses not on mains drainage had been inspected, and seventy-five per cent of them had systems that were below the new standards. As nobody had actually contacted us, we decided to lie low and pretend we knew nothing about it. We have still heard nothing and had decided the pergola, wisteria and jasmine are safe. For the time being, at least.  Then when we saw Jacques this summer he told us that the mains drainage in the village is to be extended to include our house so the pergola is once again in danger.

Here is the pergola asseen from the upstairs bedroom.  It really does provide a shady lunch spot now. 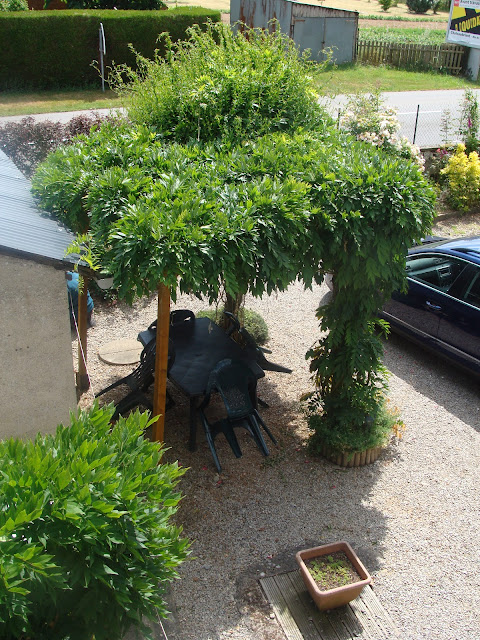 Posted by Brighton Pensioner at 09:00

It is nice, but won't it be a relief to be on the main line? So much more reliable than a septic system.

Septic tanks are no problem if looked after properly - and now we have stopped letting there should be no difficulty. But as to when - or even if - anything will happen about the main sewer...