OK, so the weather wasn't up to much.  The forecast before we went was for rain every day except Monday and, I think, Wednesday.  The reality was that I spent Sunday and Monday pruning the wisteria and jasmine while dodging the showers, Wednesday recovering from my exertions, Thursday carting the prunings to the tip - and Friday was the only sunny day when it didn't rain.  Well, not until the evening.  When we got back to Brighton last night we saw more stars in the sky - over the city - than we had seen all the previous week in the dark of the countryside!

We tend to drive along country lanes while we are sur place in La Previere; let's face it, nearly all the local roads are country lanes.  That means that they are inhabited by French farmers who seem to delight in driving their tractors in the muddiest fields they can find and then depositing that mud, along with cow pats, as far along the lanes as they can.  It's not too bad if the mud has a chance to dry out but when it keeps on raining and I drive my car along, the mud soon sprays up.  I eventually decided I could stand it no longer and spent a couple of hours on Friday morning cleaning the car, only for it to get just as muddy as before during Friday evening and Saturday morning.  But at least the wine cellar has been restocked, including the wine I want for Christmas (and that's before Bonfire Night but I bought it while it was available).

Talking of rain, do you know that "poem" of Spike Milligan's:


There are holes in the sky where the rain gets it.
The holes are small, that's why rain is thin.


I think perhaps a tour of Pouance is in order, starting with this picture.  By the way, there should be an acute accent over the "e" in Pouance so it is pronounced poo-on-say (but I'm too idle to cut and paste).  It is the nearest town to "our" village but is a rather obscure little place with a population of only about 3,300.  Why somebody should describe the crossroads by the town hall as the "Europe meeting point" is beyond me! 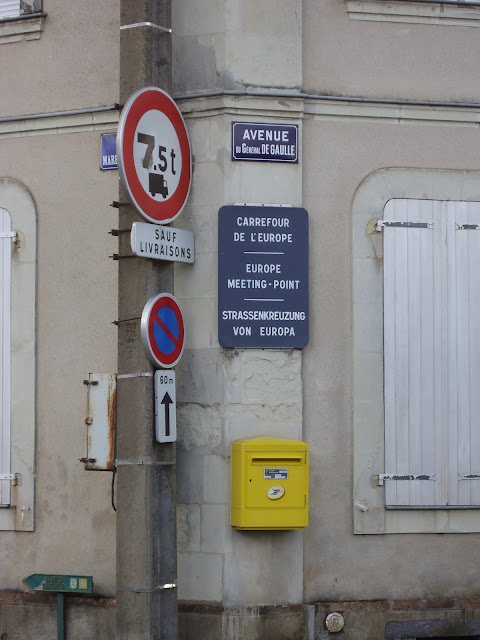 Posted by Brighton Pensioner at 13:42

I stole it from Google