I'm always a sucker for blonde hair and blue eyes, especially when they come with a young lady. yesterday I fell in love again. Mind you, she was only born in the early hours, but my latest granddaughter will be able to twist me round her little finger before she's much older. And here she is, Katie Elizabeth Rose. 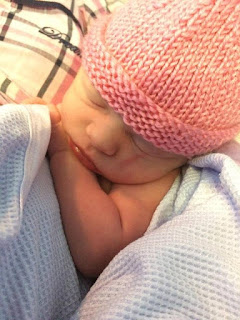 With all the kerfuffle going on, I never did get round to posting yesterday as I had intended. You see, yesterday was Trafalgar Day, the anniversary of the battle in 1805 in which the British fleet, commended by Admiral Lord Nelson, defeated the combined French and Spanish fleets off Cape Trafalgar. Nelson's flagship was HMS Victory, which has the distinction of being the oldest commissioned warship in the world!

I sometimes wonder how much of the ship actually saw the dockyard at Chatham when she was launched in 1765. A bit like the story of "my grandfather's axe. My father gave it a new haft and I gave it a new head".

Nelson, of course, was shot and killed during the battle and his body was preserved in a barrel of brandy.

Which reminds me of the story of a guide on the Victory telling a party of tourists, "That plaque on the deck is the spot where Nelson fell." To which one of the tourists responds, "I'm not surprised. I nearly tripped over it myself!"

...was gold for the Old Bat and me! Last weekend our granddaughter won the silver medal in the Sussex Gymnastics Championships, Tumbling Age 9-10 Women. What a pity we were unable to see it.

And now for something electrifying!

Posted by Brighton Pensioner at 12:14 No comments: