Many people here in the UK will be voting next Thursday.  In London, there will be an election for a new Mayor; in Wales, they will be electing members of the Welsh National Assembly.  Here in Brighton we will be electing a new "Police and Crime Commissioner for the Sussex police area".

But that is all by the bye.

It is highly probable that I, along with about 60% of the local population, will not bother to vote, which does go rather against my self-imposed principles.  I think that we who live in democracies where elections for officials are - on the whole - straight and unrigged (and there are exceptions, even here in England), we who live in such countries have both the right to vote and the responsibility to exercise that right.  I don't suggest use it or lose it, but I do think we should take our rights seriously.

The only reason I have heard any of the names of the candidates for the Sussex Commissioner's post is because the Old Bat is registered for postal voting.  I asked to see her voting paper so that I could find out who is standing for election.  None of the candidates has made any attempt to persuade voters to elect them and there has been no attempt by any person, authority or organisation to even say who the candidates are.  How can anyone possibly decide which of the five candidates is most suitable if we don't even know their names until we reach the polling station?

Another reason for my abstention in this farcical election is that each of the five candidates claims to represent a political party., the Conservative, Labour, Liberal Democrat, Green and UK Independence parties.  In my opinion (humble or otherwise), a Police and Crime Commissioner's post should not be the subject of party politics.

So, come Thursday, I shall just go and play elsewhere.
Posted by Brighton Pensioner at 11:15 2 comments:

Well, it tickled me

An advertisement in today's paper read:


Hand-made shoes; buy one get one free.
Posted by Brighton Pensioner at 16:55 2 comments:

In praise of youth

There was a time - I'm sure there was! - when the "older" generation moaned about the "youth of today".  That said, I don't recall hearing any old gits (like me) complaining recently about the younger generations.  Personally, I have never felt that there has been anything wrong with the youth of whatever day.  There are rotten apples in every barrel - but there are plenty of good, healthy ones as well!

I thought that today I would highlight just a couple of the success stories I have heard recently.

I'll start with Kidane Cousland.  Now aged 24, he grew up on a rough council estate in Tottenham, north London, one of three sons of a single mother.  At the age of 11 he was still unable to read and he left school with just 3 GCSE "C" grades.  He joined the army at 16 and was eventually selected for officer training.  He has now graduated top of his class at the Royal Military Academy, Sandhurst, and been presented with the Sword of Honour.

Then there is Zoe North.  Diagnosed with cerebral palsy just before her second birthday, her family were told she would never be able to walk unassisted. Yet, 18 years on, she has managed to defy the worst of the doctors’ prognoses to take part in the London Marathon - although she was given a head start.  In fact, she started last Wednesday and spent each of four days covering about five miles in about 3 1/2 hours.  Yesterday, the day of the marathon, she set off to complete the final stretch.  Her efforts had raised more than £90,000 for charity when she started yesterday, and could well bring in over £100,00.

And there are just so many more youngsters to whom I am privileged to take off my hat.
Posted by Brighton Pensioner at 11:37 3 comments:

Did you notice that I wasn't here yesterday?  Although, of course, I was here but actively involved in meditation so I completely missed the chance to make a meaningful contribution to your day.  Part of the time I was musing on the apparent naivete of the American President and/or his advisors who seem not completely to understand that membership of the European Union involves considerable loss of sovereignty and democracy.  Guess which way I shall be voting!

But enough of politics.

Yesterday was also the 400th anniversary of the death of William Shakespeare.  Somehow I had got into my mind that 23rd April was his birthday but I now find that was 26th April.  Mind you, everybody who celebrated commemorated 400 years since his death yesterday was doing so on the wrong day.  Yesterday was 400 years less 11 days since he died on 23rd April 1616.

Well, it's quite simple really.  Some time in the 1700s - about 1752 or 1723 or somewhere along the line - I do know it was in September one year - the calendar was altered and 11 days were cut out.  The country went straight from 4th September (say) to 15th.  Cue rioting in the streets with people demanding, "Give us back our 11 days!"

Hey, I've just checked and people do celebrate his birth on 23rd April.  He was baptised on 26th!!

But there can be nobody who has had such influence on language.  Today, there are in use many everyday phrases which were coined by the Stratford bard: break the ice; a wild goose chase; dead as a doornail; set my teeth on edge; the green-eyed monster; vanish into thin air. And many, many more.

The field next door

Well, almost next door.  There is a very small field right next door, then the farm track and then this field next door to our French hideaway.  Every year the field looks different!  This last visit, this is what we saw: 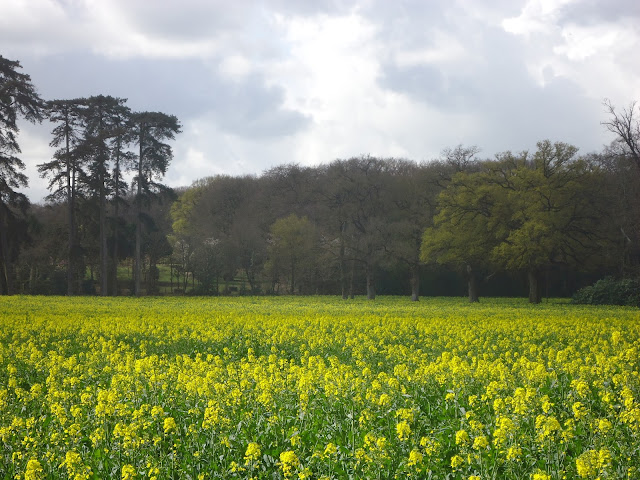 Last year, this was the scene in July: 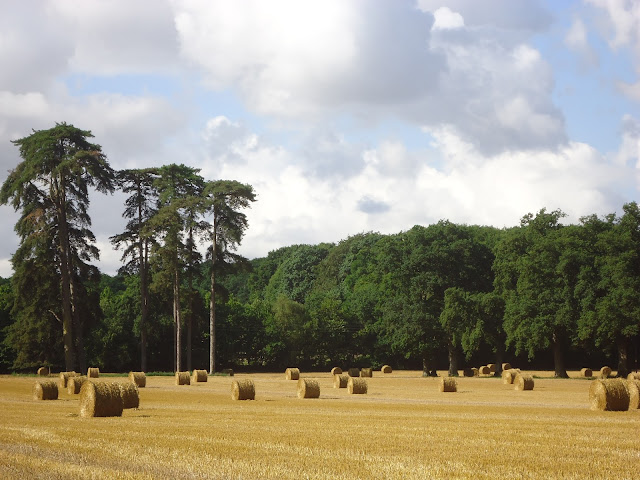 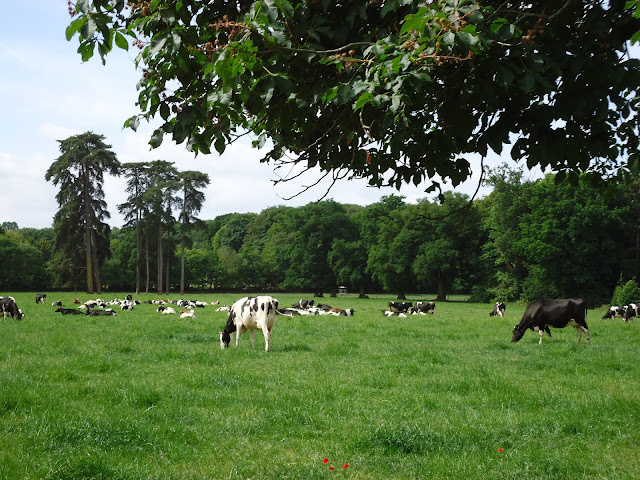 And in December 2012, the scene was distinctly different: 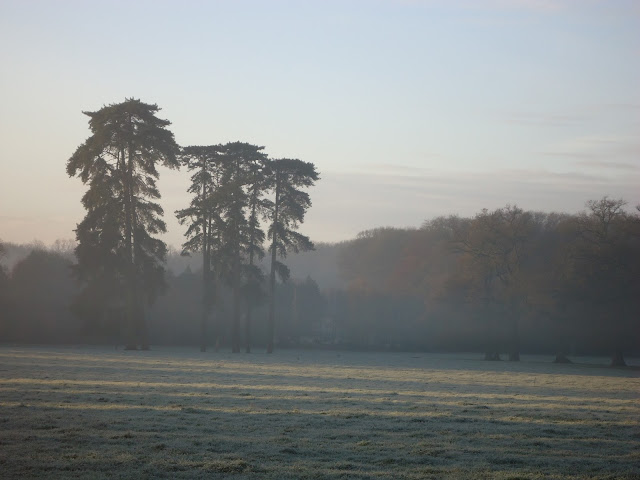 It's great to see the changes.
Posted by Brighton Pensioner at 09:57 3 comments:

Many thanks for all your good wishes.  Thankfully, I am feeling stronger each day and should soon be back to whatever it is that passes for normal.

And Sarah, birthday greetings to the Dude!
Posted by Brighton Pensioner at 15:00 1 comment:

As I carried the tea upstairs this morning, I had a sudden yen for a couple of rashers and a fried egg.

"You must be feeling better," commented the Old Bat when I told her.

"Not sure about better," I replied, "but certainly hungrier."

It has been an interesting couple of weeks.  A very pleasant break in France was marred only by me coughing for about 50% of the six hour drive from the Loire to Calais.  I had been coughing sporadically for about three weeks when I went to the doctor before our trip.  He was fairly certain that I was suffering from the bug that was going around, although I tried to convince him otherwise.  Reluctant to prescribe antibiotics, he suggested that I leave matters a week or two and return if things didn't improve.

But to cut to the chase, a further visit to the doc brought antibiotics, but two days later I was so much worse that a home visit by the doc brought an ambulance to take me to hospital.  There they pumped me so full of oxygen and Ventolin that I should have been bumping against the ceiling!  Yesterday was my first full day at home but I am amazed how weak I still am.

This was my first spell in hospital for almost 70 years so it has really been a novel experience for me.  I was not merely impressed but completely humbled by the care and devotion demonstrated by nurses working 12 or 13 hour shifts.  I was in a ward divided into bays of six beds.  At first I was in a bay where the six patients were tended to by two nurses and a health care assistant (which is, I think, the current title).  After a while I was moved into a different bay where the patients needed a lower level of care - one nurse and an HCA to the six beds.

But I was puzzled by the fact that any moves from one ward to another or one bay in the ward to another had to be conducted in the dead of night.  Fairly soon after arriving at A&E, I was put in a bay the resuscitation unit.  At 3.00am, I was moved from there to Bay C of the acute medical unit.  And there I stayed until 3.00am the next morning, when I was woken up to be told that I was being moved to Bay E!  The next move - to Bay F, a one-bed goping-home-soon bay, was at a slightly better time, although again I was woken to be told I was being moved.

All slightly bizarre, but made almost enjoyable but the nurses and HCAs from Swaziland, Ireland, eastern Europe, the Philippines and elsewhere.  Charming boys and girls, every one.
Posted by Brighton Pensioner at 10:11 3 comments:

It was 25 years ago this week that Nicole and her Papa burst onto our television screens in the first of an amusing series of advertisements.


Posted by Brighton Pensioner at 10:27 2 comments:

Trains and boats and planes

I wonder if small boys (or even not so small boys) collect train numbers these days?  And I don't mean those anorak men one used to see at the end of the station platform with their binoculars and cameras.  I'm talking about the 11- or 12-year-olds who stand by the level crossing or on the footbridge over the tracks and write down the numbers of all the engines they see.

It's probably not the same now as it was in my days on the footbridge.  Even then things were changing but the electrification of the railway line had not extended much beyond the station at Gillingham, just far enough for the electric trains that terminated there to pull through into the sidings.  A quarter of a mile or so further down the line all we would see from our eyrie on the footbridge were real engines, the steam locomotives of the Southern Railway.

There we stood, usually four or five of us, noting down the numbers - and names - of all the engines that passed beneath us on the way to exotic destinations such as Margate and Ramsgate.  There were the engines of the Schools class, each named after an English public school such as Wellington or Downside.  But I never really liked that class very much.  Far more interesting, in my youthful opinion, were the engines of the West Country and Battle of Britain classes.  These were built during the first few years after the war and served for 20 years or so before being withdrawn in the mid-1960s.  The West Country engines each carried the name of a town such as Swanage and Appledore, while the Battle of Britain engines were named after RAF squadrons or airfields that had featured in the battle.

It was a real treat when the Golden Arrow, the London to Paris express, was diverted through Gillingham, usually drawn by one of the Battle of Britain or West Country engines.


having made scribbled notes, I would take great care when underlining (in red) the numbers of the engines I had seen in my Ian Allan book listing all the engines of the Southern Railway.

Posted by Brighton Pensioner at 16:47 2 comments: