The Beggars' Litany is something that I have only just heard about which is, in one way, quite surprising as it has been about since 1594.  On the other hand, as it refers primarily to Yorkshire it is perhaps not so surprising.  I am not suggesting that Hell and Yorkshire are synonymous but Hull and Halifax are both in the county - or were, until somebody started playing silly devils with the boundaries.  Anyway, the litany as I have heard it is, "From Hell, Hull and Halifax, good Lord deliver us".

The first explanation I came across suggested that this was a thieves' litany and the Hull was the site of a particularly obnoxious gaol while the gallows were to be found at Halifax.

Brewer's Dictionary of Phrase and Fable puts the three places in a different order with Hell and Hull changing places and calls it the beggars' litany.  This book also states that Hull was to be avoided because there was little chance of getting anything without doing hard labour and Halifax was notorious for executing thieves with the Halifax gibbet, a sort of forerunner of the guillotine.

And there was me thinking that the guillotine had been invented in France at about the time of the revolution when all the while we had it in England.  Maybe they had it in France as well.

We stay in France for today's bridge - or what remains of it.  This was a toll bridge built by the powerful viscount de Polignac over the River Loire in what is now a suburb of le Puy en Velay in south central France.  Floods in 1795 left it in the damaged state we see today. 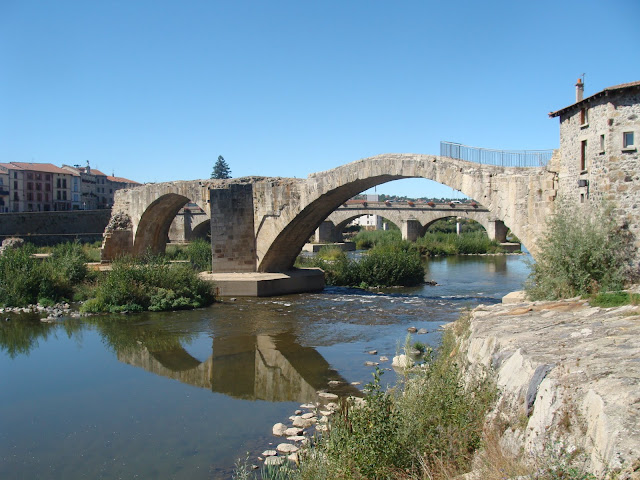 Posted by Brighton Pensioner at 09:30