Books I have enjoyed - and other things

When I "blogged in" yesterday I had every intention of writing about books I have enjoyed but somehow my fingers just started typing something completely different. Perhaps this inability to follow one train of thought for more than a minute or two is something to do with my age - or maybe I was always scatterbrained!

My recent reading material seems to have been centred to some extent on World War I. I read All Quiet on the Western Front for the first time, then a book about a family of eight children - seven boys and one girl. All seven boys served in the army during the war, although the youngest got no further than his initial training before the armistice. Of the other six, five were killed and one suffered for the rest of his life as result of the wounds he sustained. The most recent was a book which was described as 'an oral history', though how a book can be called 'oral' is beyond me! Anyway, it was about life in Britain (the home front, as it was called) during the war.

When I visited the library yesterday I made a conscious effort to break the chain and came back with a novel by Ann Widdicombe (Member of Parliament and honorary Lion in Maidstone Lions Club), a book about the Kray twins (London gangsters in the 1960s) and another about life in London in Victorian times. I hope this last will give me an insight into the lives of some of my ancestors as there were a few who lived in London in the mid 19th century.

That, I find, is one of the problems with 'doing' family history. It can become a bit like train spotting, with just a list of names, dates and places. I want to know more about the people, their personalities and how they lived.

Well, I still haven't written about books I have enjoyed, but perhaps that will come one day.

Oh yes - the weather forecast was right. It is raining.

Posted by Brighton Pensioner at 10:54 No comments:

I think it was Wordsworth who wrote about "season of mists and mellow fruitfulness, close bosom friend of the fast maturing sun", but, whoever it was, I bet he didn't write that on an August day! This month is well on the way to being the least sunny August since sunshine records were first kept in 1929. Not that we have had over much rain. There has been some, but mainly we have had cloudy, overcast skies. Today, however, is different. A bright sun in a clear blue sky, with temperatures at present about 23 or 24 Celsius. The forecast for tomorrow is rain.

But to get back to the season of mists and whathaveyou. That poem is entitled 'Ode to Autumn' - and autumn seems to be fast approaching. Already the leaves on our cherry trees are turning and falling, and I noticed this morning that the leaves on the sycamores and beeches in the park have started as well.

Autumn has started - and it's still only August!

Posted by Brighton Pensioner at 12:38 No comments:

Let there be light

Yesterday I needed to change a light bulb but we had used the last spare for that fitting a couple of days ago, so off I set for the nearest hardware/DIY store, the local shops and supermarket not stocking that type. I was amazed (I nearly typed 'dazzled' but thought that too awful a pun) by the range of light bulbs available. There were the traditional bulb shape, a round shape almost as big as a tennis ball, another round shape the size of a golf ball, straight candles, twisted candles, bayonet fittings, large screw fittings, small screw fittings, and a range of halogen bulbs for recessed fittings. And of course they all came in a range of wattages and either clear or pearl. What's more, they all have reference numbers now - I wanted E14. A far cry from the days when one would go into Woolworths, select a 40, 60 or 100 watt bulb, clear of pearl, and the girl behind the counter would test the bulb before taking one's money.

What surprised me was that it was cheaper for me to buy two packs of two bulbs than one pack of four!
Posted by Brighton Pensioner at 11:26 2 comments:

Some years ago I became interested in researching my family history. In those days it was a slow process but the advent of the Internet has speeded things up considerably. When I started, I was happy to have found 2 or 3 ancestors a week, whereas now I can find as many in 10 minutes - when I can be bothered, that is.

As well as discovering something about where I came from, I suppose I was secretly hoping to uncover skeletons - long forgotten scandals. Maybe a highwayman, or a child transported to Australia for stealing a loaf of bread. Unfortunately there has been little of that sort of thing, but my 7 x great grandfather must have been quite a character.

Simeon Waldegrave was born sometime in the 17th century - when and where is not known - and he lived in Portsmouth, where he died in 1705. There is a family legend that he made a fortune supplying the English fleet which was blockading Cadiz, but how that arose I don't know. What is known is that he left his son, Heyman, the sum of £500 in his will and that Heyman thereafter decribed himself as a 'gentleman'.

There are a few documents still in existence which throw a little light on Simeon.

On 14 September 1702, at Portsmouth, "Robert Hewett and William Tooth do formally make oath that this day how at Portsmouth Simeon Waldgrave did in his dwelling house sell and retail beer and those depositioners do further make oath that they have heard and believe that the said Waldgrave is not licenced to sell and retail ale or beer according to law."

Then on 13 January 1703, "John Oglander, surgeon, maketh oath that he doth look after Daniell Lowe a minor, that he the depositioner is clearly of opinion that he [Daniell Lowe] is not in danger of dying by the wound he now hath and [which is] supposed to be given him by Simeon Waldgrave."

I like to think Simeon was really a likeable rogue as he was an overseer of the poor (probably an unpaid position) and possibly a magistrate. But maybe that's just wishful thinking and he was an out-and-out rascal.

Posted by Brighton Pensioner at 10:44 8 comments:

Like most men, I consider that I am a good driver. But it is getting on for 50 years since I passed the driving test. Since then, cars have, of course, changed quite a lot: they have become very much more powerful and the handling has altered. There are also a lot more of them on the roads. To add to all that, I am certain to have developed some bad habits along the way.

So I decided I should look into taking the 90 minute long advanced driving test of the Institute of Advanced Motorists. This involves undergoing training with specially qualified instructors (usually police class 1 drivers).

I have signed up for it, and received my advanced driving guide, a book covering the essentials of so-called advanced driving. On reading it, I discovered that I already put into practice most of these points. At least, I think I do. Now I have to contact the local group to arrange for my first observed drive when I will probably find that I don't!

Watch this space.
Posted by Brighton Pensioner at 11:26 No comments: 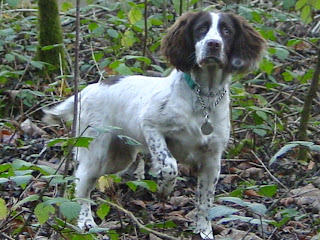 Uncle Skippy was under the impression that Pebbles is the dog's name - not so. She is Fern, a four-year-old English springer spaniel. Why Fern? Well, our previous dog, a golden retriever, was called Bramble, a name chosen by our then children. (They are still our children, but are now all adults with families of their own.) Fern just seemed to be a continuation in the same vein.

Our eldest grandson was just running and walking when Fern was a pup and they used to enjoy racing each other round the dining table. Whenever Ben fell over, Fern would just stop and wait for him to get up. She adores children to this day, and she and our 15-month-old granddaughter are great friends.

Owning a dog does tie one down, but there are compensations. I have to take exercise every day, no matter what the weather is like, because Fern needs her walks - an hour in the local park after breakfast, which can be a very social occasion with all the other dog walkers around, and an hour in the afternoon, usually in local woods. This is less social and provides more time for thinking, though in fact it is usually the OB who does this walk.

Another compensation is the fact that there is something (I almost typed 'someone') to greet one when coming into the house. And whatever some people might say, there is a bond of affection between a dog and its owner.

Posted by Brighton Pensioner at 11:03 No comments:

Walking the dog provides an excellent opportunity for ruminating and mulling over all sorts of things. This afternoon I realised just how few are the people I really respect, and how the person I most respect is probably my cousin's husband.

My cousin (I shall call her L) was diagnosed about five years ago as having multiple sclerosis and we have watched as the condition has progressed to the stage where she has difficulty in walking about the house even with a wheeled walking aid. She spends most of her day in an armchair in the kitchen. Meanwhile, her husband (J) has to manage the farm, butcher the deer, cows and sheep, tend the farm shop, do the cooking and laundry, and generally look after L. And he does this with such patience - even managing to fit in chairmanship of the parish council.

What triggered this train of thought was the fact that earlier today I came very close to losing patience with the Dearly Beloved over something quite trivial but, in the nick of time, I remembered that what had so annoyed me was something that she couldn't help. It was a result of her medical problem. Oh, how I could do with some of J's patience!
Posted by Brighton Pensioner at 16:53 1 comment:

I could, I suppose, keep a diary, but somehow I never manage to do so. I think that posting occasional random thoughts, musings - ramblings even! - on a 'blog' will lead me to use reasonably correct English since I wouldn't want anyone who happens to stumble across this site to think of me as illiterate.

Posted by Brighton Pensioner at 11:34 No comments: