It was yesterday that the Old Bat and I attended the monthly lunch for people connected with Scouting in Brighton. There are usually between about 20 and 40 people turn up for the meal, which is at a different pub each month. The venue this month was the pub at the edge of the Devil's Dyke. a deep, dry valley cut into the South Downs and a popular spot to visit. This was the view along the edge of the Downs to the west when we arrived: 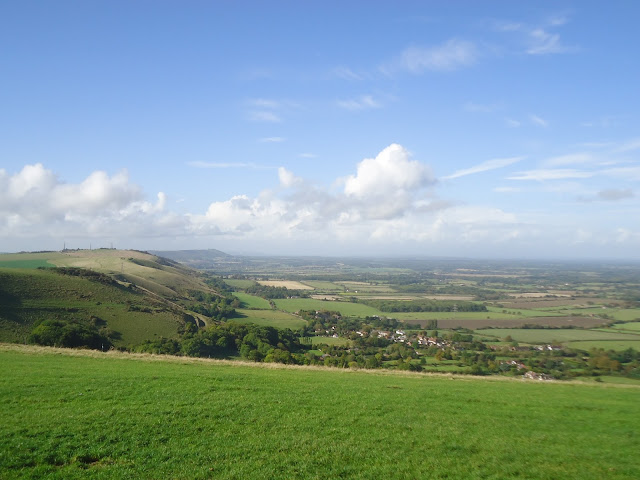 And this is looking towards the north-west an hour-and-a-half later! 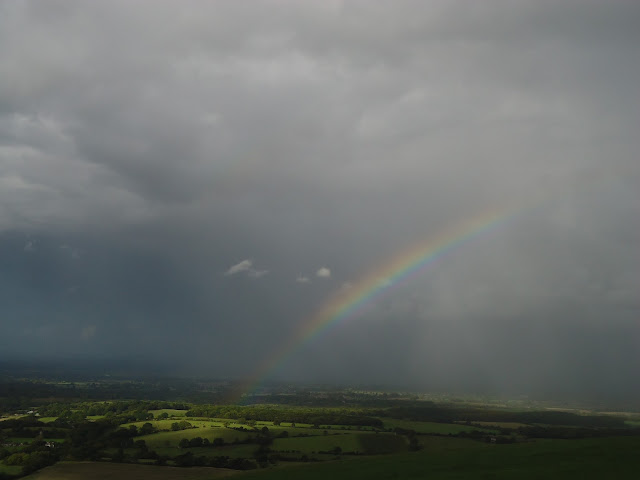 I wonder, do you know the story of how the Devil's Dyke was formed? It involved a spat between Cuthbert, who lived in a village just north of the Downs and was later made a saint, and the Devil.

Back in the mists of time (I know - that's a cliche but I like it so I'll repeat it!) Back in the mists of time, an old lady (some say she was a nun) lived the life of a hermit in a small cottage on top of the Downs. Cuthbert was in the habit of visiting her to encourage her in her prayerful life and one day, on his way to visit the old lady, he stopped to rest a little way off. He was admiring the view over the Weald, particularly noting the number of churches that had sprung up, when the Devil appeared beside him.
The Devil was furious because at one time the people of the Weald had worshipped him. He blamed Cuthbert, and announced that he would dig a passage through the Downs so that the sea would rush in and drown all the Christians in the Weald. Cuthbert struck a bargain and it was agreed that if the Devil could dig his channel before sunrise the next morning, he could reclaim the Weald. If he failed, the Devil was to leave Sussex for ever.
Cuthbert left the Devil digging furiously and went to visit the old lady. He asked her to make sure that she rose at a very early hour and asked that she should place a lighted candle in the window facing west.
The old lady did this. The Devil saw the light to the east and thought it was the rising sun. He had only dug halfway through the Downs, so he flung away his shovel (you can still see the mark where it hit the ground) and left Sussex, never to be seen again. The steep-sided valley that he dug is known still as the Devil's Dyke and is a popular tourist attraction just north of Brighton.

This picture shows the Dyke from the closed end:

There is one date that is remembered by just about every Englishman, although very few know more than just the year. Ten sixty-six and the Battle of Hastings are more or less synonymous and it was on this day - 14th October - that year that the famous battle took place. It's known as the Battle of Hastings, but it was actually fought several miles away from the Sussex town. An abbey - Battle Abbey - was built on what was supposedly the site of the battle and a small town has grown up around it.

That was the last time on which a foreign army successfully invaded England, although for several hundred years incursions by Scots and Welsh occurred from time to time. Of course, it was not the first invasion: Angles, Saxons, Jutes, Danes (if they are not the same), Vikings and Romans had all at one time or another managed to move inland from the landing beaches and stay for varying lengths of time. Indeed, the English can really be called a mongrel race.

But William, Duke of Normandy, didn't see his action as an invasion. The background to the invasion is rather complex, but it started when King Æthelred II of England (Ethelred the Unready) married Emma, the sister of Richard, Duke of Normandy. Their son, Edward the Confessor, was childless and when he died in January 1066, he was succeeded by the Earl of Wessex, Harold Godwinson. But Edward had spent much of his life in Normandy and William claimed that he had been promised the throne when Edward died.

It gets even more complicated because the King of Norway reckoned that he should succeed Edward and he sent an army to back up his claim. It was that army that Harold had defeated at the Battle of Stamford Bridge in Yorkshire - after which he and his army marched 250 miles in just four days to face the invading Normans.

The final result is that we have a lot of French influences in the English language, a great record of the country in the 11th century in the Domesday Book, and a lot of castles!
Posted by Brighton Pensioner at 16:13 2 comments:

That's the Beachy Head lighthouse at the foot of the cliffs towards the bottom of the picture.
Posted by Brighton Pensioner at 14:53 6 comments:

Three holes in the ground, as my old granny was wont to say.

"Well, where have you been?" I hear you ask. (Well - and that's the second one - I don't really but it's as good a way as any of letting you know that I'm still here.)

Well (and that's the last one) actually I'm back. I've been back for over a week but have been enormously busy.

Can one be 'enormously' busy? I'm not at all sure that one can, but I've been busy. Let's just leave it at that.

We (that's the Old Bat and me - or I if you prefer) did have a week in France. And very restful it was, especially on the two mornings when we were able to sit in the courtyard and soak up the sun. But since we got back it's been go,go,go all the time and this afternoon is the first opportunity I have had to bore you all rigid.

I must say there are times when I wish we were back in our village without newspapers or, especially, television. Watching the goings on across the pond makes me very glad I'm not an American and as certain as one can be that one of two presidential wannabes will be forced upon me. Choosing between those two seems very much like choosing the lesser of two evils.

On the other hand, I was delighted the other afternoon to see that there are still harebells in bloom in the Ladies Mile nature reserve. In mid-October! They surely should have finished before now. And as I was walking across 39 Acres another day, a bird flashed past very fast, much too fast for me to identify it. I was pretty sure that it was a falcon; body shape, wing shape and flight pattern were right. But all I could really say apart from that was that it was grey or brown on the back and paler underneath, smaller than a kestrel but larger than a blackbird. Hobby or merlin seem the most likely candidates - but I have never seen either breed and don't know that they are South Downs regulars - although if it was a hobby it could be on migration.

Just another of those insoluble mysteries.
Posted by Brighton Pensioner at 16:37 2 comments: