There has been something of a furore recently after the discovery that beefburgers sold by a number of supermarkets, often under their own-name brands, contained a significant quantity of horse meat, in several cases as much as 27%.  There were also found traces of pork.  Understandably, Jews and Muslims have been distressed that they may have eaten meat from pigs but as this was completely unintentional and, indeed, through no fault of theirs, I am sure their God will show mercy on them.

What most people have found distressing is the idea that they have eaten horse meat.

(Short digression: you notice that we say "horse meat" whereas most of the meat we eat has different names from the animals.  Cow meat is beef, pigs give pork and sheep give lamb or mutton.)

What the majority of people seem to have overlooked is, to my mind, far more important.  How did this pass inspection?  If unwanted meat can so easily find its way into the chain, how can we be sure that all the meat is actually fit for human consumption?   Then, of course, there is the fact that somebody somewhere in the chain has passed off cheap horse meat as the more expensive beef - which is fraud.  But to most people it is simply the fact that they may have eaten horse that is the cause of their distress.

English people - townies, at any rate - are peculiarly sensitive about what meat they will eat.  If it comes from an animal that they might have kept as a pet - rabbit, dog, cat or horse - it will not be eaten.  Personally, I have no such hang-ups.  Well, almost no such hang-ups.  I'm not sure that I would be very anxious to eat dog or cat, let alone squirrel, hedgehog or (shudder) rat.  I have never knowingly eaten horse but I might have done as I have eaten steak tartare in Paris.  The Old Bat refuses to touch veal because she sees in her mind's eye calves penned tightly out of the daylight so as to keep the meat pale.  My protestations that English veal is not raised this way cuts no ice with her.

One of my sons has never been able to eat venison since we had a barbecue on my cousin's farm.  Venison burgers (made on the farm) were being grilled while, over the fence, the remainder of the deer herd grazed quietly.

Then there was the Easter that we visited to find two delightful Jersey calves, Crocus and Splodge (don't ask me: I didn't name them!).  These creatures were an instant hit with my young daughter.  By the time of our next visit only Crocus was there.  My cousin's three children and our two boys were sworn to silence about the origin of the roast beef that Liza served.  As always, we visited the farm shop and brought away a quantity of meat: venison, mutton if there is any, and beef.  A few Sundays later, we were sitting at the table with roast beef when daughter raises her fork with a piece of beef impaled.

"Is this Splodge we're eating?"

We sheepishly confirmed that it was.

So this morning's challenge was a walkover.  No, I didn't have to walk to the dentist.  The buses were running their normal service.  At least, the one I was interested in was, so up with the ladder, Jack!  And by some chance, my jaw was back to normal when I woke.  The dentist couldn't explain it either, and he could see nothing wrong.

The snow is melting and the grit a neighbour has put on our road has worked.  If I can clear the drive and across to the wheel tracks in the road this afternoon, I should be able to get the car out tomorrow for a trip to the doctor, another to the supermarket and yet another to the vet!

The woos seemed very monochrome this morning - until i spotted a splash of colour almost hidden. 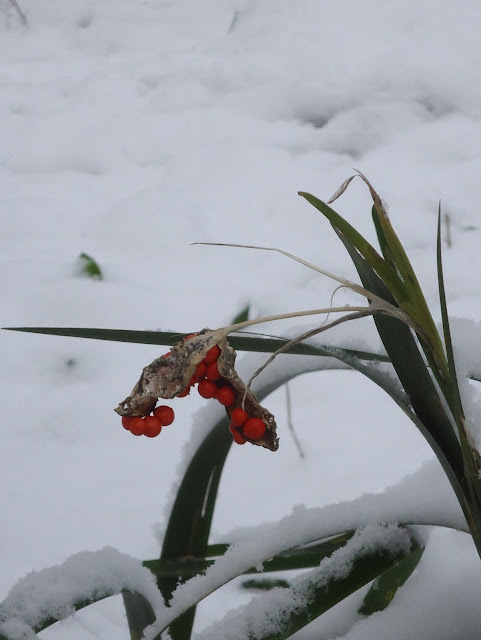 Posted by Brighton Pensioner at 14:59