A few weeks ago I remarked how I seemed to have lost my appetite for reading and how a book I would have expected to read in a few days had taken me three weeks to read.  I am pleased to note that my former literary lethargy is now a thing of the past.  Of course, that lethargy may perhaps not have been lethargy at all but simply a lack of time for reading.  Last week I had plenty of time with no newspapers, television or - worse - computer and internet to distract me.  The result was that I read several fairly unremarkable novels and one collection of letters that was far more noteworthy.

Letters From a Lost Generation is a collection of letters written from 1913 to 1918 between Vera Brittain and her brother, her fiance, and two other friends. Some of the letters were included in Vera Brittain's classic account of her wartime experience, Testament of Youth (Penguin, 1994. reprint), but most of them are now being published for the first time. The letters provide insight into the youth of the day and how their feelings and emotions developed during the war, turning from idealism to disillusionment to an acceptance of death. The collection is unique because these letters span the entire war, showing both male and female perspectives. By the end, you know the people, feel their tragedy, and see hope change to despair as loved ones are killed.  [I quote shamelessly from Amazon.]

The events set in motion by the outbreak of the First World War in 1914 changed many lives irrevocably. For Vera Brittain, an Oxford undergraduate who left her studies to volunteer as a nurse in military hospitals in England and France, the war was a shattering experience; she not only witnessed the horrors inflicted by combat through her work, but she lost the four men closest to her at that time--her fiancé, Roland Leighton, brother Edward, and two close friends, Geoffrey Thurlow and Victor Nicholson, who all died on the battlefield or as a result of wounds sustained.

Poignant, even disturbing, but well worth reading.

The town hall in Pouancé is an imposing building standing at the Carrefour de l'Europe.  [In yesterday's picture you can see that this has been translated as "Europe meeting-point" although "carrefour" actually means "crossroads", "intersection" or "junction" - something I failed to mention.] 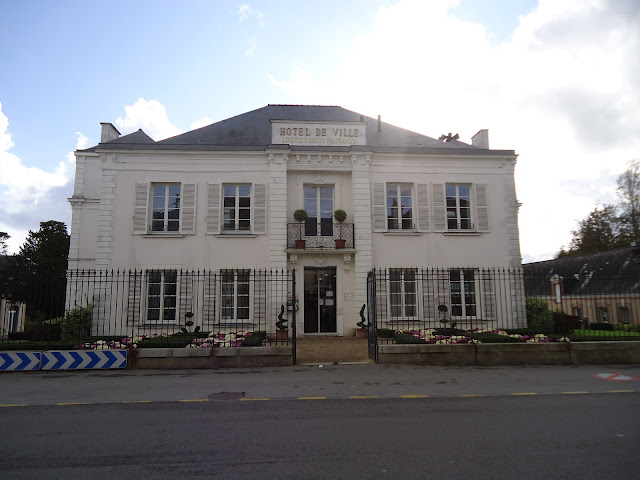 Posted by Brighton Pensioner at 12:12