You live and learn...

...die and forget the lot.  (Good old granny once again.)

It's surprising - or perhaps not - just how much one can learn browsing the webbynet.  Even the odd blog or two!  For instance, one day last week I learned that there are such things as parasitic plants.  Fleas I knew of.  Ticks too.  But plants?  That was a new one for me.  I had discovered this astounding information on Colin and Elizabeth's blog where they mentioned a plant called the common broomrape.  This, I learned, is a parasite which attaches itself to and therefore grows from another plant's roots, presumably being unable to produce roots of its own.  It is also unable to produce chlorophyl, which might be why it is completely brown.  (I really am ignorant about these things.)

Seemingly this plant is particularly fond of clover - which is probably why I just happened to spot it in a field where I was walking the dog.  This is a field where the grass has been left to frow for hay and there is an abundance of clover.  I had not taken my camera that day but I went back a few days later and found plenty of examples to photograph. 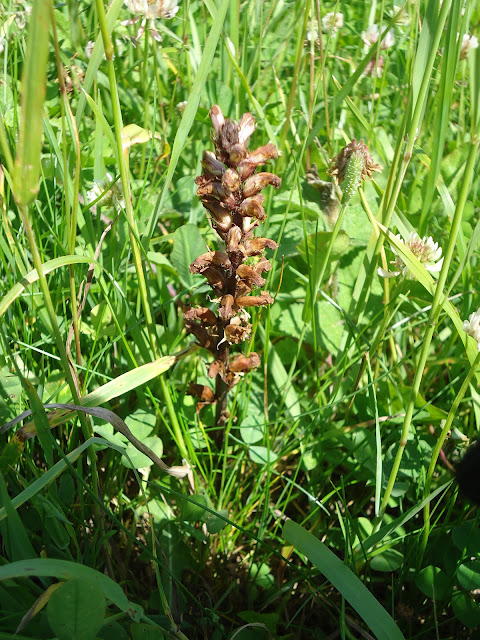 A few days later I was on the Roman Camp when I saw somebody who looked as though he knew a thing or two about wild flowers as he was busy taking close-up photos of them.  He was using a tripod so he seemed to me to be pretty serious and I thought there was a good chance he could identify one particular flower which I have seen nowhere else and which was in full bloom all over the Camp that day.  As it happened, he knew the flower and the name was on the tip of his tongue but all he could recall was that it is related to the willow tree.

I mentioned, in passing, the broomrape saying I was surprised to learn that there are parasitic plants.  "There's another one," he said.  "That yellow flower next to your foot."

I don't know what that flower is called either - but I do now know that parasitic plants exist - and there is more than one of them!  I wonder what I shall learn next?
Posted by Brighton Pensioner at 08:30

Fascinating. I think I'll look that up myself.

Surely you knew mistletoe is a parasite... right?

Now you come to mention it, Buck...