I had intended to spend most of yesterday catching up.  The Old Bat and I had spent a week at our French house, driving back on Thursday.  And what a day that turned out to be!  It didn't just rain, it monsooned all the way from the Loire very nearly to Calais, a jouney which takes us about eight hours with the number and length of stops we make on the way.  We sometimes stop for a meal at Calais but this time we decded to continue the trip on the basis that we would be home reasonably early and the Old Bat would cook omelettes.  Our booked train was the 20:50 from Calais, arriving at Folkestone at 20:25 thanks to the change in time zones but we were confident of being able to change our booking for a departure at about 19:20.  Unfortunately the trains were so full that the earliest we could switch to was the 19:50.  But what we didn't know until we had checked in and it was too late to turn back was that trains were running behind schedule because of what was described as "an earlier incident".  It was 10:30 or later before we finally arrived in Brighton - but at least it wasn't raining this side of the Channel.

So yesterday I was going to catch up with emails and reading the blogs I follow.  But I had not allowed for the wind.  Gusting at up to 80 mph, this was almost a living animal.  And the OB was due for a hugh dosage oxygen session in the diving bell.  So I had to provide an arm to stop her being blown over and that was the morning gone.

We were, of course, away from home over the Jubilee weekend and so missed all the jollifications.  I had, however, set the DVD recorder beforehand so we have many hours of programmes to while away the sultry summer evenings - or the cold, wet, windy ones.  Most of the coverage I have recorded, including the Thames river pageant, was on BBC as I consider they generally handle those big occasions better than the competition.  I am, however, wondering if I made a mistake as there was criticism in yesterday's paper, obviously ongoing citicism, about the somewhat fatuous approach of the BBC's presenters.  Luckily I had saved a copy of a Sunday supplement from a week earlier in which there are reasonably full descriptions of the various sections of the flotilla and the vessels in them.  But perhaps more of that when I have watched the recording. 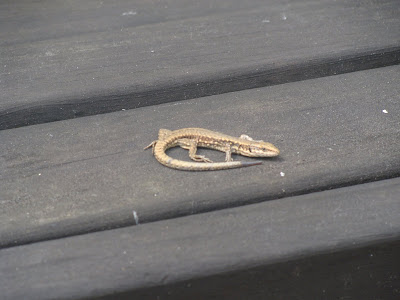 We are quite accustomed to seeing lizards in the courtyard over in La Prévière, usually looking like this one which was sunning itself on our bench.  Most of them are about three or four inches long, including the tail which probably accounts for about half of the length.  They scurry around but scuttle under a shed door or flower tub as soon as they realise that a human is in the vicinity.  But not so the one I met last week.  I was using the flame-thrower to burn off the weeds and he (or she) seemed intent on suicide by self-immolation as he (or she) would keep heading for the heat.  Eventually the beast went indoors and I was able to lift the door mat with the beast on it and deposit it on the far side of the courtyard.  But I have never seen a lizard like this.  Longer (about six inches) and fatter that the run of the mill lizard, it was also a bright green with - as you can see -b lack spots and a vivid orange stripe down its back. 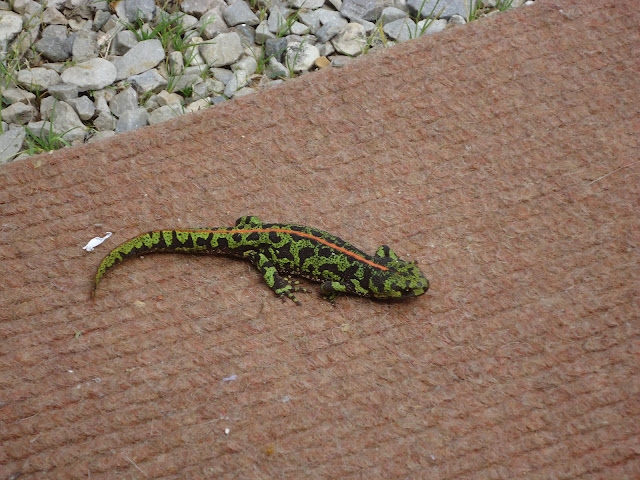 Posted by Brighton Pensioner at 07:11

The green lizard looks something like a gila monster, but gila monsters aren't nearly as bright.

That's not a lizard, it's a marbled newt. They're slow moving amphibians that look a lot like lizards, so it probably wandered out of a creek nearby. They are amphibians, so I don't why it went toward the heat of the flamethrower, but it was certainly not a lizard.

Thanks, Dante - but I'm puzzled as there is no water (that I know of) within half a mile or more.