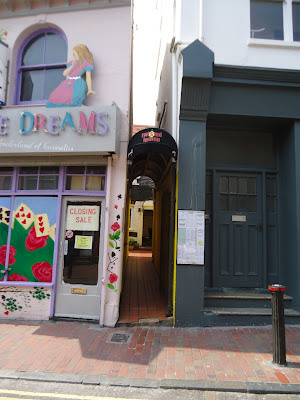 I think it was while my daughter was a teenager that we first heard of Annie's restaurant, said daughter having been taken there to celebrate a friend's birthday.  The restaurant was not actually owned or managed by a woman called Annie but that had been chosen as the name of the establishment.  It was in a small, flint-built fisherman's cottage - possibly 500 years old - set at the end of a narrow passage between shops in the Lanes.  You can see from the picture on the left just how narrow the passage is.

There was room for just four tables on the ground floor with a little more space upstairs - maybe 36 covers all told if people tucked their elbows in.  All very cosy.  The menu was cosy as well, concentrating on pies: steak and ale, turkey and apricot and various other delicious options.  It quickly ecame a favourite eating place of ours.

Then - horror of horrors - the whole thing changed.  We understood it was still in the same ownership but gone was the name Annie's - and gone, too, were the pies.  Or most of them.  Almost overnight, it seemed, Annie's had become Blind Lemon Alley and the menu had changed from pies to burgers and the like.  Not being great burger fans, we were somewhat relucant to visit the changed establshment but eventually decided to give it a try.  It was, it seemed, still as popular as ever and booking was essential even though the tourist hordes rarely made it up the passage - now painted yellow to give the reason for the new name.  Never a place for a quiet, romantic evening, the decor was just the same - plain wooden tables and a homely, friendly atmosphere.  The staircase to the upper floor was still hobbit-sized.

The food was just as good if not better than before and I quickly fell into a routine of not even reading the menu before ordering deep fried potato skins with cheese and bacon as my starter, followed by a burger (I don't recall just which one) with garlic potatoes (Oh, those garlic potatoes!) and finishing with a slice of Eli's Chicago cheesecake served with cream.  OK, so you've spotted the contradiction.  I said we were not burger fans, but these were burgers the like of which we had never beforecome across in England.  They were not your massed-produced packages of gristle but made daily on the premises from good beef supplied fresh every day by a local butcher.  All the difference in the world.

But four years ago the owner went broke and the restaurant closed.  It has (fairly recently) re-opened but now calls itself a cocktail bar with food.  I did look at the menu the other day as I walked past and it might be worth a try.  I noticed that I should be able to park almost right outside - something that is not easy to do in the Lanes but essential these days for the Old Bat.  Maybe in the not-too-distant future.

Right opposite is this old cottage which I find very attractive. 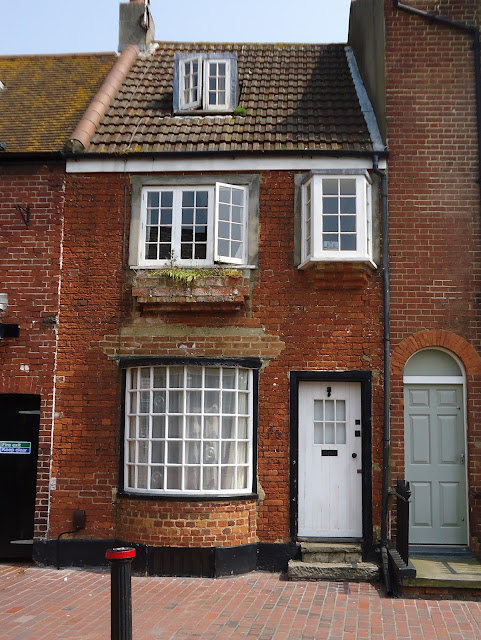 Posted by Brighton Pensioner at 06:23