With neither television nor newspapers nor computer and internet while we are in France, I do manage to get quite a bit of reading done.  On this latest trip there were two books in particular that I was looking forward to opening: Calico Joe, John Grisham's latest which I had been given as a birthday present, and Believing the Lie, the latest Inspector Lynley novel by Elizabeth George which I had borrowed from the local library.  Both proved disappointing for different reasons.

I rather suspect that in the case of Mr Grisham, his publishers were pressing for another book and he dusted off a draft he had written some years ago, padded it out just a little and sent it off.  Yes, there is the nub of a plot but I found I was quite unable really to believe in the characters - and far too much of the book read like a report of one or more baseball games in the sports pages of a newspaper.  But on the plus side I did learn quite a lot about baseball!

The interplay between the aristocratic Inspector Lynley and the almost-Essex girl Sergeant Havers is one of the strong points in Miss George's novels and also in the television adaptations broadcast by the Beeb.  There is a modicum of it in her latest offering and I found most of the other characters as believable as hers usually are, but somehow there was just something lacking.  The plot was as convoluted as ever, maybe more so with more than the usual twists and surprises along the way.  All the same, I didn't think this vintage George.  Coincidentally, there is a repeat of a Lynley episode on television tonight and I don't recall either seeing this one before or reading the book either.  I shall look forward to it.

The last time we went to France I suggested to the Old Bat that she might enjoy Loss of Eden, John Masters trilogy set at the time of the First World War.  Although we did take the first of the books - Now God be Thanked - she didn't get round to reading it.  We took it with us again this time and she was very quickly hooked by the story of how the war affected three or four families from a town and a nearby village in Kent.  Almost as soon as we were home she had picked up the second book.  To my mind this trilogy is one of the classics of the 20th century and I just cannot for the life of me understand why it is not better known.  It really is right up there with Birdsong and The Cruel Sea, two more that I consider to be modern classics.

Yesterday afternoon was windy but bright.  I went up the Waterhall valley for the first time for several weeks - and discovered this: 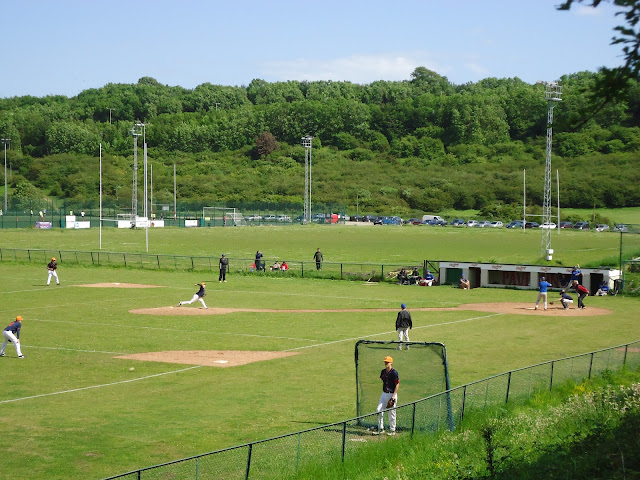 Posted by Brighton Pensioner at 11:13

Bezbol? In Ol' Blighty? Who'd a thunk it?