We love to hate them

There's a sort of love:hate relationship between the English and the French.  It's nothing new: it's probably been going on for the better part of a thousand years, since William the Conqueror decided he wanted to be King of England way back in 1066.  At times the relationship has been more hate than love, sometimes just hate.  (Think of Crecy and Agincourt.)  And certainly there seems to be a national animosity among the French because they needed liberating from the German occupation.  There is a feeling among some English people that the French police are out to "get" English motorists, choosing to stop an English driver rather than a Frenchman if two drivers are committing offences.  French motoring law is different from English and there are several points that English drivers need to bear in mind before driving in France.  It has long been the case that French law requires each car to carry a warning triangle, not something that is necessary in England although it is considered good practice (not that many drivers seem to know the correct way to use them in the event of a breakdown).  It is also a requirement that a spare set of bulbs is carried - which seems especially daft in my case as changing a bulb in my car is a garage job!  Some confusion exists over whether a first aid kit is compulsory.  If it is, one wonders just what such a kit should contain.  I say that a few sticking plasters is sufficient as my knowledge of first aid is so limited that I could never use any more than that.  But the latest - or soon-to-be latest as the law comes into effect next month - is that each car must carry a breathalyser.  Or two - because if it is necessary to  use one there must always be another so that there is a minimum of one in the car.  What I have yet to discover is just when one might be expected to use one.  Do the French police no longer carry them but expect drivers to provide their own if they are suspected of driving with too much alcohol in the blood?  I shall probably never find out.  I have been stopped by the police just once in the nearby town.  They were pulling all cars over and checking documents.  Luckily I had mine with me and since then I have made a point of always carrying my driver's license, my insurance certificate, my MOT certificate and the car registration document.  Of course, I have never needed them again.

The Patcham windmill has recently been swathed in scaffolding but I noticed when I was at Waterhall the other day that this has now been removed and the mill is a pristine white.  From it one can presumably see the rugby pitches and baseball diamond of yesterday's photo. 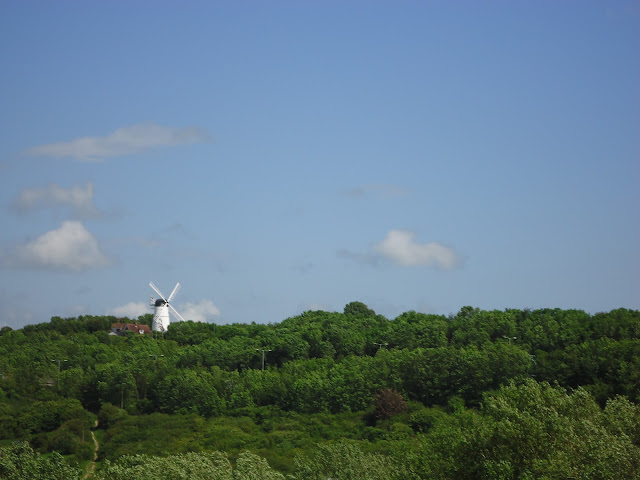 Posted by Brighton Pensioner at 08:30