That's Charter Night done and dusted for this year.  It all went pretty well with just one or two very minor cock ups.  My speech was well received - largely, I suspect, because it was short.  In all, the speeches took only 23 minutes or so.  The meal was good, one of the best hotel meals I have had in a long time and a lot of people said the same.  While the choices available on the menu were not particularly inspiring, the food was well presented and properly cooked.  There was plenty of it and the hotel included half a bottle of wine per person in the price which made it very good value at £30 to include meal and a live band for dancing.

Today the town is split in two by the London to Brighton bike ride orgainsed by the British Heart Foundation.   I have not managed to find out how many cyclists are due to take part this year but I am sure in other years it has been somewhere in the region of 30,000 (yes - thirty thousand).  Trying to get across a road they are streaming along can take ages.  It does mean that several of my favourite walks with the dog are not available to me today but fortunately I can still get to 39 Acres and the Roman Camp.

The observant may have noticed that I referred to the town being split in two.  Yes, Brighton & Hove is a city not a town - and I haven't the foggiest idea what makes a town a city except that it is done on the authority of the Queen acting on the advice of her ministers.  Brighton and Hove were previously two adjoining towns which were merged into a unitary authority, which is a bit like a mini-county.  The unitary authority was later promoted to city status and took the name Brighton & Hove as neither town wanted to be left out!  However, I - and, I suspect, many others - still think of the two separate towns rather than the city.

This time of the year would be one of Fern's favourites if dogs had the sort of brain with the ability to select favourites.  The grass has grown long and she delights in running through long grass and hunting down a tennis ball.  The grass on 39 Acres is cut just once a year, in the autumn, and is now so long that it can be difficult to spot Fern in it.  This picture is actually of part of the golf course beside the Roman Camp - and there is a springer spaniel in that grass. 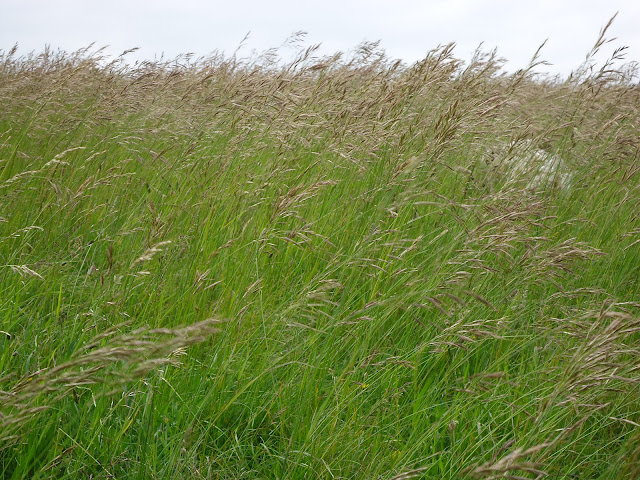 Posted by Brighton Pensioner at 11:46

From what I know about bike riders, I am not a bit surprised about 30,000 riders. I wouldn't be surprised if many of them didn't ride their bikes back home afterward.