A Mars a day helps you work, rest and play

So while I was in the supermercado yesterday to buy the usual boring things like milk and broccoli and breakfast cereals and cleaning materials (as one does) I treated myself to a Mars bar.  I couldn't help thinking how they have shrunk over the years.  Yes, I know it's partly a way of increasing the price without actually increasing the price but some of it, I expect, is because I look now through adult eyes and no longer the wide eyes of childhood.

Back in those days, when a Mars bar was almost as big as a loaf of bread, my brother and I would, on the rare occasions when we had a Mars bar each, borrow my mother's fruit knife and cut the bar into slices, just like a loaf of bread.  I think there must have been two reasons for doing this: it made the bar last longer, and anyway it was fun!

Barclays Bank has been fined pretty heavily for its part in fixing interest rates in a way that is illegal.  Not that I understand just how this could have been done - it all goes way above my head when anybody attempts to explain it in words of two syllables or fewer.  Anyway, it seems that the London Inter-Bank Offered Rate, or LIBOR, which is the rate at which banks borrow from each other, was set artificially high.  Now that might not, at first glance, seem to be of any interest to the man in the street (as opposed to the man on the Clapham omnibus) but look a little deeper and you will see that there are many companies affected.  One small example is close to home (for me).  Brighton Lions Housing Society, of which I am treasurer, has a loan from Barclays and the interest rate is linked to LIBOR.  The loan started at £2.25 million so we are talking significant sums (for us) in interest.  I believe there is a class action under way in the States and it will be interesting to see how this develops.

And it might not be just Barclays.  Several other banks are also under investigation.

The fine, by the way, was £59 million - which seems to me to be an odd sum.  That's odd as in peculiar, not odd as in uneven  Why 59 and not 60 million?  I suppose it's all Monopoly money to those involved so it doesn't really matter.

Just like the Mars bar, Shoreham harbour is not what it was.  Time was when there was coal for the power station and timber from the Baltic as well as general shipping.  However, there is now a fishing fleet, albeit a very small one.  They use the eastern end of the harbour where the daily catch is sold to to public with a separate salesroom for restaurateurs. 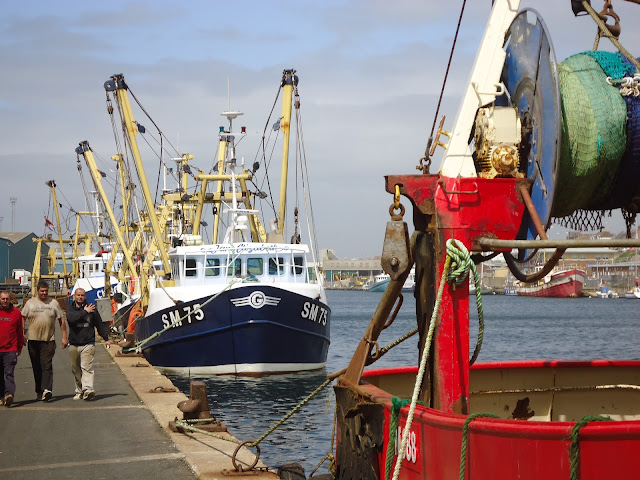 Posted by Brighton Pensioner at 10:33

Your photos are consistently excellent, Brian. Enquiring Minds™ wanna know... what sort of camera do you use?

Thank you, Buck, very kind of you to say that. The camera I use most is a small point-and-shoot Sony Cyber-shot - either the DSC-W320 or W330 (I can't remember which and I'm too lazy to go out to the car to look).

And thanks for letting me know! I'm really in awe of how far the technology has progressed in the digital camera world. It's simply amazing.