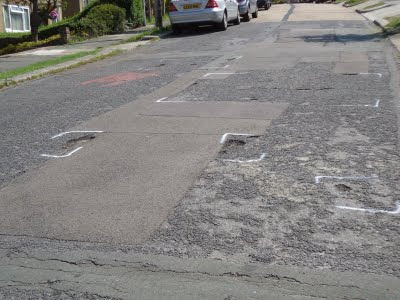 Yesterday, a young lady came along our road with a can of white paint which she proceeded to spray to mark where she considered the potholes sufficiently large for the road to be repaired. It is no more than a few months since the road was last patched - it was after the bad winter - and, as you can see from the photo, this has been a fairly frequent occurrence over the years. But patching the road, just filling in the potholes and resurfacing a bit around each of them, seems to me to be a case of penny wise, pound foolish. Most of the potholes we have now and which are shortly (we hope) to be filled in have appeared in places where the road was patched before. Patches just don't last. Surely, it would be cheaper in the long run to resurface the whole road properly?
Posted by Brighton Pensioner at 09:12

Perhaps there is some sort of underlying problem or concern, such as gas pipes or sewerage or some other thing that, if they tore up the entire road, might be extremely costly to repair? Otherwise, of course you're right. It never pays to patch, in the long run.