Number 22 in the series.

We start with the usual note about pronunciation. "Warwick" is pronounced "Worrick", not "war-wick".

Although the north of the county is in the industrial heart of England, there are some very attractive villages in the southern and eastern parts. Many of the buildings are in the local sandstone which has a rich red colour. This, I think, tends to make old town centres rather gloomy, especially when the stone is discoloured from pollution.

There are two great castles in the county - Warwick and Kenilworth. Warwick is now almost a theme park with its medieval banquets, jousting and so on, while the vast medieval fortress of Kenilworth Castle is one of the most spectacular castle ruins in England and set in vast grounds perfect for exploring. This was the home of Robert Dudley, lover of Queen Elizabeth I, but was destroyed in the Civil War by Oliver Cromwell's forces.

Apart from Warwick itself, the most popular destination for tourists is Shakespear's town of Stratford-upon-Avon. In and around the town are five houses connected with the playwright: his birthplace, the farm owned by his grandparents where his mother grew up, Anne Hathaway's cottage where his wife lived before marriage, Halls Croft where his daughter and son-in-law lived and Nash's House where his granddaughter lived. Nearby stood New Place, where Shakespear lived and died. This is now a garden (the house is long since destroyed) where one can see an ancient mulberry tree which is claimed to be from a cutting planted by Shakespear. Stratford has many half-timbered buildings in the ancient town centre and a stroll provides a delightful experience.

This week's picture is of Anne Hathaway's cottage. 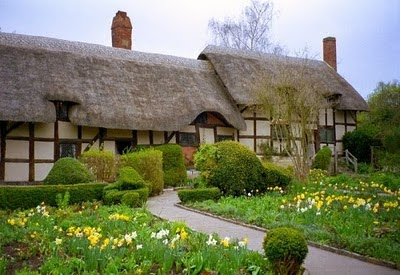 Posted by Brighton Pensioner at 09:11

"Angel wings to touch the soul and take them all upset, and instead left the light, love, health, love, happiness, hope and faith .... Happy happy!" (According to Google)