Number 23 in the series.

Northamptonshire is probably best known as the home of the British Grand Prix as the Silverstone circuit lies in the county. The county town (Northampton) was the centre of the English boot and shoe industry but that has now all but disappeared. Likewise, Corby was an steel town but the works have been shut down. Corby is still the home of the Pole Fair, which takes place once every 20 years. It involves readings of the Royal Charter – granted by Elizabeth 1 in 1568 - at special toll gates around the town, followed by a carnival. Anyone who fails to pay a toll is carted off to the stocks.

This is not a county well-known for its tourist-attraction beauty spots but there are gems to be found by those who look. The Talbot Hotel in Oundle is one example. Although the hotel's origins date from the original timber hostelry of 638 AD, the Talbot was rebuilt from the stone ruins of nearby Fotheringhay Castle in 1626. The ghost of Mary Queen of Scots, who was imprisoned and executed at the castle, is said to haunt parts of the hotel, particularly the magnificent oak staircase down which she reputedly walked to her execution. Oundle is also the home of the ubiquitous school, one of England's oldest public schools (fees - £27,000 a year for boarders).

On our pictorial tour we have not yet seen much of England's really old castles but this week we can put that right. Rockingham Castle was built on the orders of William the Conqueror almost a thousand years ago. It was relinquished as a royal castle by Henry VIII and has been owned and lived in since then by the Watson family. This is the solid-looking gatehouse. 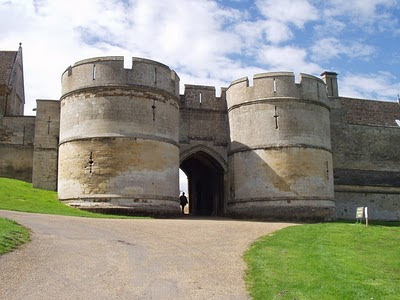 That's what I call a castle!