Number 17 in the series. 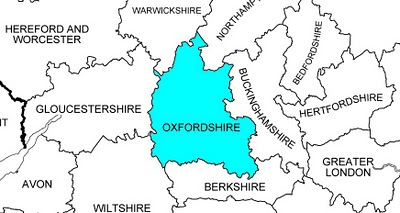 Oxfordshire has one foot in the Chilterns to the east and the other in the Cotswolds to the west, with the bulk of the county's southern boundary being the River Thames, or Isis as it is called in Oxford.

There are some pretty villages in the west of the county, although the better known attractions of the Cotswolds are in neighbouring Gloucestershire. Henley-on-Thames is the site of the annual Henley Royal Regatta, considered to be the premier rowing regatta in the world and definitely one of the highlights of the traditional English social season - straw boaters, striped blazers, Pimms and cucumber sandwiches.

Of course, the main tourist attraction in the county is the city of Oxford itself, home to one of the oldest universities in the world. The first college was established somewhere between 1249 and 1264 and even New College dates from 1379. When a person says he was ‘at Oxford', that is understood as meaning he studied at the University. However, I can also claim I was ‘at Oxford'. I was at the University for a short period. I applied to Worcester College and actually got as far as spending a few days in room on a staircase in one of the quads while I sat the entrance exam. That, I regret to say, was as far as I got. Worcester being "my" college so to speak, our picture this week is of a corner of one of its quads, quite possibly showing the door to the staircase on which I stayed. It was so long ago that I can't remember which one. 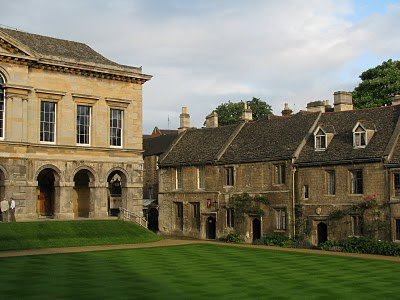 Posted by Brighton Pensioner at 09:58