It was as long ago as 1840 that the penny post was introduced, the template on which most postal systems in the world are based.  Pillar boxes were introduced in the Channel islands in 1852 and were to be found on the mainland the following year.

When I think that to post a letter nowadays even second class postage costs a minimum of 53p, which is ten shillings and sixpence (half a guinea) in 'real' money - 126 times what it cost back then.  Of course, the average wage has increased by rather more than that, so one penny wasn't really as cheap as it sounds.

But the level of service is, perhaps, not quite what it was.  I have heard tales of how one person could send a letter in the morning, inviting a guest for tea that afternoon, and receive a reply before the guest arrived!  I have myself seen a postcard written by my late father-in-law to his then fiancée confirming that he would be home the following day and obviously sent in full confidence that it would be delivered early the following morning.  Nowadays we are lucky if a letter arrives only two days after it has been posted.

Which leads me to the point of today's rant.  If you look at the picture of a post box you will see that all sorts of information is provided, particularly the day the next collection will be made and the time of the last collection from that post box. 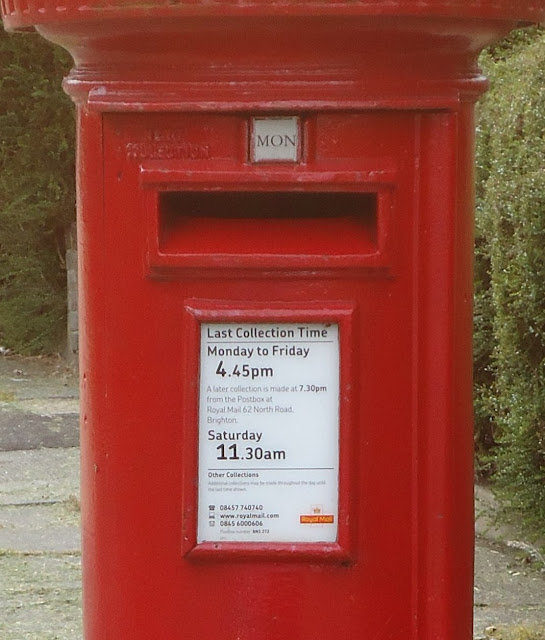 All very hunky-dorey. But not so very long ago I stopped off to post a letter on a Friday morning, a letter I really didn't want hanging around very long although I forget now just what was so important.  This was at about 9.40, that's 9.40AM.  The metal plaque indicating the day of the next collection showed Saturday and I simply assumed that the postman had made a mistake.  Then I saw that the time of the last collection had been changed.

The last collection is now made at 9.00AM!
Posted by Brighton Pensioner at 16:24