I'm not at all sure just why I have been thinking recently of my late grandmother.  But I have been. 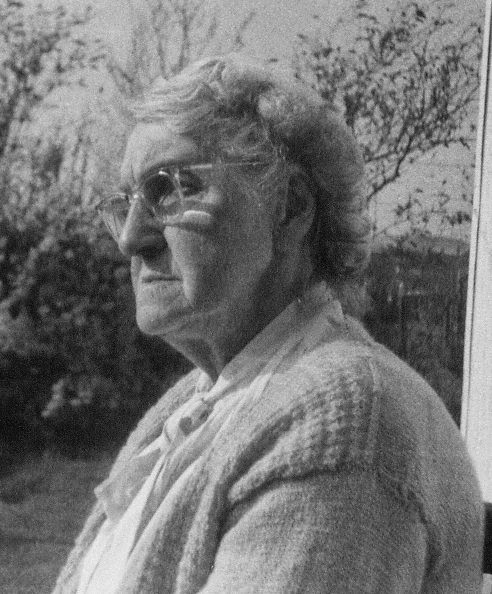 My mother could never have been described as an assertive person so it must have been quite an ordeal for her as a new bride of just 20 years of age to be living right next door to her in-laws.  Furthermore, my father was away at sea for much of the early part of the marriage.  During my boyhood, Gran never came across to me as an awkward person but in her old age she was distinctly cantankerous.

Living next door to Gran had definite advantages for my brother and me.  There was a gate in the fence between the two gardens - probably made by my grandfather - so it was easy for my brother and I to pop next door.  In my memory, Gran spent a lot of time baking - always buns - and scraping out the mixing bowl while the buns were in the oven was a great treat.  As were the warm buns later!  My brother and I could, occasionally, earn a little extra pocket money by scraping the salt.  This was bought in blocks.  I don't really remember what size those blocks of salt actually were but in memory they were about the size of a large loaf of bread.  The block had to be scraped with a spoon or similar tool and the resulting grains could be stored and used.  We would sit at or kneel up to the table with the block between us on a sheet of newspaper, scraping like mad.

My fondest memory, though, is of the three of us - Gran, my brother and me - sitting in front of the fire playing board games.  Sometimes we would play snakes and ladders, but ludo was always the favourite.  I always played with the yellow counters and Graham had the red ones.  I think Gran usually used the blue.  There were great shouts of joy whenever one of us children managed to send Gran's counter back home.

And Gran always seemed to be singing.  She was a very spasmodic church-goer and although professing to be Church of England, I always felt she inclined more to the Methodist Church or even the Salvation Army.  Despite it being only the occasional Sunday that she went to church, it was always hymns that Gran sang, which is probably why I knew the words to so many of the old hymns.

I've just checked my records and I see that it was in August 1913 that Gran and Grandad married.  How different the world was then.
Posted by Brighton Pensioner at 10:51