Before he died, an uncle of mine wrote his memoirs.  Fortunately, his memory was pin-sharp and he could recall names of both fellow pupils and teachers from way back - something like 60 or 70 years.  My memory is nothing like as good as that, a matter of constant regret to me.  All the same, given how fascinating both his children and grandchildren found his memoir, I determined to do likewise.  Somehow, although I did at one time make a start, I have never really driven myself to get down to it.  I have, from time to time, posted snippets here on the blog, and that, perhaps, will be the best way for me to continue.  At least I will know where to find all the bits of what could be quite a large jigsaw.  On the other hand, given my failing memory, perhaps what will emerge will be more a work of fiction - or a very short autobiography!  Whatever I do manage to get down on screen, it is unlikely to be of more than passing interest to any regular readers I might have attracted but it might just stir up a few memories for other people.

Having thought all that out, it struck me that many people bemoan the fact that nowadays, in the 21st century, there is not that sense of community that once existed in our towns.  There might still be the remnants of it in smaller villages, but in the towns and cities it is nowhere near as strong as it is said to have been 70 or 80 years ago.  But the loss of that community spirit, or part of it, is all part and parcel of the evolution of our lives in general.  Back then - in England, at any rate - many people, possibly the majority, lived in small houses built in long terraces.  There were no front gardens, the houses opening straight onto the street, and only small back yards.  Meeting one's neighbour would have been a much more frequent occurrence then than now, especially as the women, once married, were at home or at the local shops buying fresh food every day.  The men would, very likely, be working together at the docks, on the railway or in a local factory.  Now, of course, most of the women are out at work all day and the men are quite likely to commute to towns and cities some distance away.  There just is not the social interaction in the daily lives of people that once there was.

Of course, it doesn't help that English people are so reserved.  With the lack of day-to-day social interaction, there is a lot less of the popping next door to borrow a cup of sugar, or delivering a bunch of flowers to new neighbours.  Anyway, it might not be convenient for them if we just turn up on their doorstep unexpectedly.  Much better to wait for an invitation.

Heavens, I have really drifted off course again today.  Better stop now before I end up somewhere I don't know where I am.

Yesterday I posted a picture of the Kennedy memorial at Runnymede.  Just a couple of hundred yards away is another memorial.  This was erected by the American Bar Association to commemorate the signing of the Magna Carta - which has provided the basis of the American constitution. 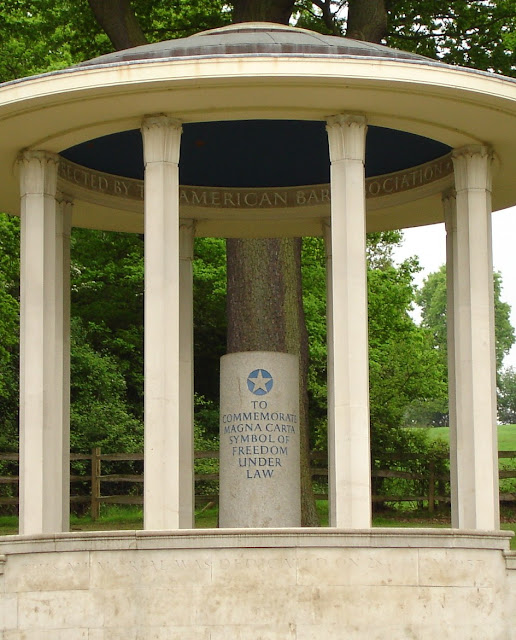 Posted by Brighton Pensioner at 11:00

I think that wealth has something to do with friendliness as well. Our area has "come up in the world" and I do notice that people are far less likely to be friendly, perhaps because they don't think they're going to need others - they can hire people to help them. Or something.