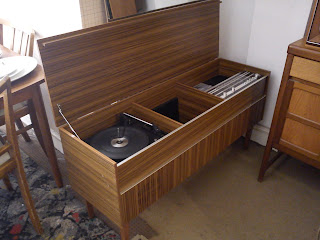 That was the subject line of an email I received recently from a cousin (whom I have never met, but that's the case with so many of my cousins).  The email consisted of a string of pictures of things from the past, like fish and chips in newspaper, an early holiday camp, a pound note, Tony Hancock - and a radiogram.  It certainly stirred the old grey matter and brought back some long-forgotten memories.

I have mentioned before that my parents were among the last to move into the television era.  And it wasn't just televisions that we didn't have in our house.  As well as an old radio - which probably needed to be switched on several minutes before the start of a programme one wanted to listen to so that the valves could warm up - my mother possessed a portable radio which was run on a large battery.  The radio must have measured about 15" x 10" x 6" and it certainly weighed a darn sight more than any transistor radio!

One day when I was 15 or 16, my father came home from work carrying a large object which he had bought at an auction sale he attended in his lunch hour.  It was a gramophone, the first we had ever owned.  But even then - and I am talking the late 1950s - it was out of date.  It was a wind-up machine with a horn-type wotchamacallit that the music came from.  And what music!  The gramophone had come complete with a large pile of 78rpm records, the sort that broke if dropped and that scratched as soon as one looked at them.  There was Dame Clara Butt singing Blow the Wind Southerly and other songs one wished never to hear and somebody's orchestra playing In a Monastery Garden and other equally Edwardian or Victorian age music.  But, this was a novelty and we played those records.  My brother and I even went to the expense of visiting the local branch of Woolworth's where we bought cheap cover versions of popular songs on the Embassy label (Woolworth's own).  I seem to remember Carolina Moon being one of the first purchases.

But there came the day when my father must have felt rich.  He bought a radiogram.  Now we could play those 45s and even LPs.  If I remember correctly, the first 45 I ever bought was the theme music from the film Bridge on the River Kwai.  The film was released in October 1957, so perhaps that radiogram came into our lives the following year.  There was a blue label on the record; Parlaphone or perhaps Polydor?

We still had no television but I do remember that we always enjoyed Sunday evenings in particular.  Homework had been done, we had enjoyed a traditional roast lunch, then it would have been a standard bread-and-butter tea before evensong.  After church, the radio was tuned to Radio Luxemburg for Winifred Atwell's programme (she was a honky-tonk pianist), the salted peanuts would be brought out, and we would sit down to play cards, either Newmarket or Sevens at a ha'penny a knock.  Simple pleasures, but great ones.

Is it just me, or are they marching out of time to the music?

Posted by Brighton Pensioner at 10:28

I collect those :)) i have grundig bergamo st ( dont know why they wanted to make a geographical name for those musikschrank's ) whats the name of one in the picture? Is it still alive?

Sorry, moscowandy, I have no idea; it's just a stock pic borrowed from somewhere.