Although I have owned a mobile phone for many years, I have yet to use it to send a text message.  I suppose in all honesty I should admit that I rarely use it to make a phone call - and never to receive calls.  In fact, the phone is rarely switched on - and we make a point of not telling people the number.  I have no wish to receive a raft of calls like the one we received some years ago when we were driving to the south of France.  I forget now just why the phone had been switched on: possibly I half expected a call to say that my mother had been taken ill or something along those lines.  Anyway, we received several calls, all of which seemed to come from the same person.  I can't be dogmatic about that as it was the Old Bat who answered as I was driving at the time.  Eventually, she told the caller to delete our number as it was costing both him and us a fortune - and no, Cathy wasn't able to come to the phone and no, neither of us was going to the football that evening.  I nearly flipped when the bill came and I saw what it had cost me to receive all those calls I didn't want.  Nowadays I switch the phone on when we are in France - once a day, just to check.  And that's about the only time I use it - to make a booking at the village restaurant if I can't face trying to track down Nicholas and, if I'm successful, get away from him in under half an hour.

As I was saying, I have never sent a text message.  I've never seen the need - but that is about to change.  We were told on the lookerers course on Saturday that after we have checked sheep, we should send a text message confirming all is well and advising the voltage and pulse rate of the electric fence.  I told the chief honcho that I would need instruction on sending text messages, which gave rise to general laughter.  Head honcho pointed out that the web site specifically says that one requirement of becoming a lookerer is sending texts.  I politely corrected him and told him that the web site says it is a requirement that lookerers have mobile phones; it says nothing about sending text messages.

Yesterday, younger son and granddaughter arrived for lunch so I took the opportunity of sending him a text - just to make sure I knew what I was doing.  It went very well, considering, right up until after I saw the screen saying that my message was being sent.  Then the on-screen message changed to read, "Message failed".  We tried all sorts to get my mobile to send a text message, to no avail.

As it happens, my mobile phone company has a shop in Brighton.  I will hie me there this afternoon and no doubt some spotty-faced underage geek will give me a scornful look and sort the problem in 30 seconds flat or he will look at my ancient mobile phone and try to sell me a newer model.

This peaceful scene is a mile or so down the road from our French house. 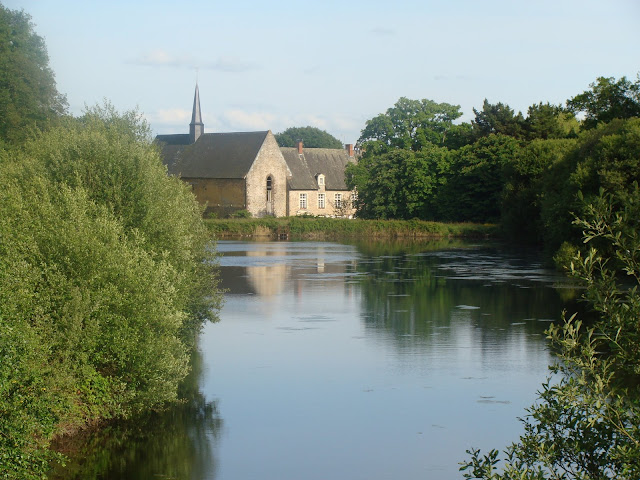 Posted by Brighton Pensioner at 09:20

It probably won't matter how old your phone is.
He will still try to sell you a new one.

Texting with the old phone is not fun... newer ones with keyboards are a little better.
I will text for initial contact then for further discussion switch to a call.

My money's on Option Two.

Skip is right: newer phones with keyboards make texting so much easier. And they have INTER-TUBES!

Well, I fat-fingered THAT. The "V" is supposed to be "...or he will look at my ancient mobile phone and try to sell me a newer model."