The labyrinth of my mind

I never cease to be amazed at the convoluted way in which my mind works.  I suppose other people's minds might perform similar tricks but it takes something special in the mind to link, as my mind has, Suldog, my parents' summer holiday habits, George Frideric Handel, a nine-inch television screen, Frankie Vaughan, the Farnborough air show and the Huddersfield Choral Society.  Now that I've given you the tease, the come-on, I had better provide the explanation.  It starts with Suldog.

Suldog (Jim) recently blogged about his favourite Christmas music.  That, not unnaturally, set me thinking.  What is my favourite Christmas music?  Well, Jingle Bells it is not, nor Frosty the Snowman.  My two favourite carols are probably Hark the Herald Angels Sing and O Come All Ye Faithful, but very high on my list of favourite Christmas music are two of the choruses from Handle's oratorio, The Messiah - the Allelujah chorus and For Unto Us a Child is Born.  I remember that, as a child, I heard the Messiah every Christmas.  The BBC broadcast it and my mother always had the radio on to listen to it.  (Funny, I don't recall my father ever being there.  Perhaps he was away at sea every year.  No, he can't have been.  But that's another story.)  I seem to recall that the performance was, every year, by the Huddersfield Choral Society.

See?  Already I have provided evidence of the tortuous reasonings of my mind and have linked three of those seemingly disparate subjects.  Now read on...

You will have noticed that I mentioned listening to that inspiring music on the radio.  Back in those days very few English homes had such a thing as a television set.  They didn't really come into their own until 1953 when many people bought them to watch the coronation.  My parents didn't buy a television until, oh, the later 50s or even, perhaps, the early 1960s. But that's yet another story or two.  I am uncertain when I first saw a television programme.  It might have been when we visited my parents' friends Doris and Reg.  They certainly had a set and I have vague memories of seeing Frankie Vaughan performing Green Door on it.  But now I have checked I find that Mr V had a hit with that song in 1956.  That means my other early television memory is from an earlier date.  And this is where my parents' holiday habits come in.

My parents were nothing if not consistent in their holiday planning.  In their later years they spent a week each summer at the same guest house in Cornwall, each year booking their next holiday before they left - along with at least one other couple.  When my brother and I were young our holidays were at Broadstairs, a seaside town some 44 miles away.  Then in 1951 or 1952 the mould was broken and we went to Folkestone, another seaside town just 43 miles away.  You might have gathered that my parents were adept at befriending other people who were staying at the same guest house, and that is what happened at Folkestone.  So it was that in September 1952 we travelled to Farborough to stay with Ron and Elsie and their two sone, Ronnie and David.  Ron was a bus driver and the family lived in what hid, I imagine, at one time been a farm labourer's cottage.  It certainly seemed small and was probably a two up, two down sort of a place.  But that was where I first saw a television.  Ron and Elsie had a set with a nine-inch screen.  I don't remember being much impressed by this technological marvel even at my tender age.  We had gone to stay with them for the weekend in order to visit the Farnorough air show.  It was 6 September that we went - the day John Derry, a test pilot, was killed when the DH110 he was flying broke up in mid-air.  Fortunately, none of us were hurt - 29 spectators were killed and 63 injured.

I did warn you that my mind runs in tortuous twists.

The weather both yesterday and so far today has been and is foul with heavy rain and blustery winds.  I wouldn't mind being back in the warmth of the Luberon, where this picture was taken.  It is the courtyard of Domaine Faverot where we bought some excellent wine. 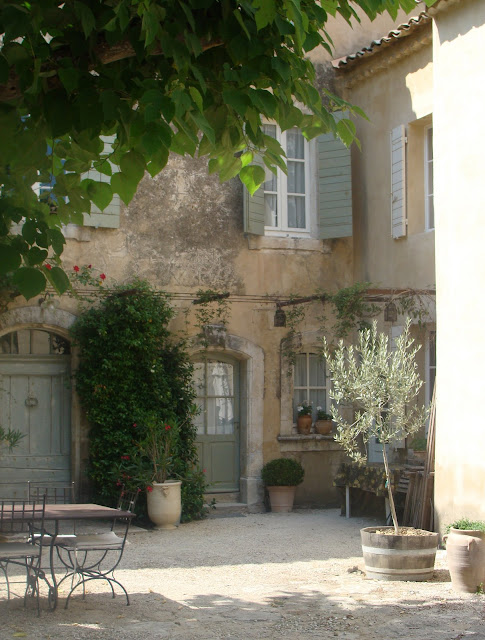 Posted by Brighton Pensioner at 10:59

Life runs in torturous twists. It appears you remember and relate it well.