It sticks in my craw

My waist expanded yesterday evening by an inch and a half. I know just how much because I ended up the evening undoing the top button of my trousers and it was then I observed that the button was that far from the button hole. At the start of the evening the two had been pretty much in alignment. It was going out for a meal that did it. I had for some time been intending to take the Old Bat out for a quiet meal on our own but somehow had never managed to find just the right time to suggest it. I'll skip over the reasons for that and simply say that this week I got it right. Madam chose the local Italian restaurant. We have eaten there before with much pleasure and yesterday was no exception.

The Old Bat elected to have garlic mushrooms from the starter menu accompanied by garlic bread. She opted to go without a "main" course so that she could have dessert. I skipped a starter and ordered tagliatelle amatriciana. When it came to ordering desserts, we decided we would each order a different one and swap over half way through. I ordered tiramisu - which they do particularly well - and the Old Bat plumped for pannacotta. After just one bite she informed me that there was no way I was getting any of it! Naturally, I gave way with good grace.

When the bill came I glanced at it quickly before handing over my credit card. I noticed that a 10% service charge had been added with no "by your leave" and with no real option to delete it. I suppose I could have done if I wanted, but I would have left a tip anyway so I didn't bother. As it happens, the cash tip would probably, certainly have been more. I also saw that the cost of my pasta was shown as two items, the sauce and the pasta. I thought that the price shown for the sauce was the price I had seen on the menu but assumed I was wrong. In any case, the charge for the tagliatelle was, as you can see, only 50p. 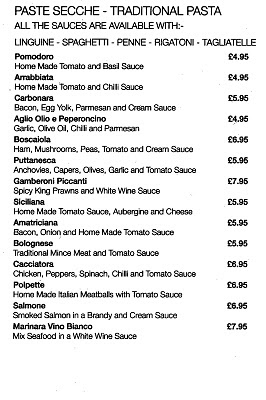 On the way out I picked up a copy of the menu which they provide for take-away business. I see from this that the price for amatriciana is £5.95 and there is no mention of an extra charge for the pasta. No don't get me wrong. I would have been quite happy to pay £6.45 for my meal, but it does stick in my craw to find that I am being charged extra for something which is an integral part of the meal , which extra charge is not mentioned anywhere but on the bill when it comes after the meal. That smacks to me of sharp practice.

Now, we don't eat out all that often but we do like this restaurant. The food is good, it is conveniently placed and we can always park pretty much right outside. But as a matter of principal I do not like being taken for a mug. But, as I said, it is only 50p. If a supermarket tried to charge me 50p too much I would certainly argue about it. If it were, say, £1 I would almost certainly argue about it. But do I really want to make a fuss and possibly create a scene by quibbling over 50p when we eat there again? Or do I cross that restaurant off the list on the grounds that I don't like their business practices? This is going to take some thinking about. And all over 50p.
Posted by Brighton Pensioner at 10:23

It would be interesting to see if they do this double-charge for other customers. If they do, then now you know and it's up to you if you patronize this place again. If you're the only one paying double, I'd make a stink!

I'd be a bit miffed too.

I've never heard of being charged for the pasta as an "extra" before.

Ring the trading standards office and ask if this is normal.