Why I changed my camera

I have two cameras, one of which I keep in the car "just in case". That is the elder of the two and has an irritating glitch - which was partly what made me decide to buy a new one. The problem can be seen in both yesterday's pictures, but is even more obvious in this picture of Venice. There is a dark blob in the upper left section of the picture, beside the pointy bit of the tower. It is particularly annoying in this shot, which I would otherwise like very much. It was taken as long ago as March 2007 on our one and only visit to the city. We took a boat to a small island and went up the tower of the church of San Giorgio Maggiore from where there is a terrific view over the city. Here we have the campanile and the Doge's palace with the domes of the cathedral behind it, and numerous towers of the churches across the city. In the distance are the snow-covered Dolomite Mountains, and there is a row of gondolas tied up in front of the palace. 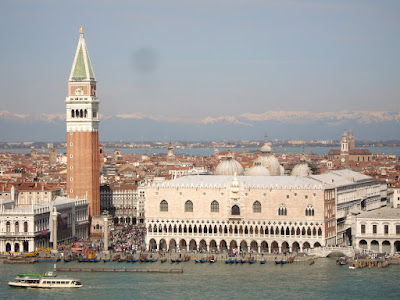 Posted by Brighton Pensioner at 12:32