0030 Katy eventually takes pity and calls a halt. We fall into bed with the prospect of just a few hours sleep before another early start.

0500 Back on the road. Brian decides to avoid the Cologne rush-hour and roadworks on the Rhine bridge by taking a turn off through Bonn. Wrong again! The roads don't coincide with the map and we end up in the centre of Bonn after crossing the Rhine. Passing the British embassy and the Bundeshaus we spot signs for Cologne and decide to follow them. They take us through a short street where lorries are prohibited, but just 100 yards later another motorway starts. Back over the Rhine (eastwards) and north towards Cologne, preparing ourselves for the Cologne rush-hour and long delays on the bridge over the Rhine. Brian explained that he thought Bill would be interested in seeing the Rhine bridges.

Round the Cologne ring road easily - very light traffic and no roadworks on the bridge. Sue has now discovered why Tony wanted to sleep in Roy's cab: tea and biscuits in bed in the morning. When they set off they are puzzled by the absence of lorries and even check Roy's diary to make sure that it's not a bank holiday.

Katy was stopped at the Belgian border and asked for autobahnfische. What's that? A ticket costing DM12 that we should have bought at any petrol station. Result - DM500 fine. After paying, the Teutonic official shows us where we could have bought one just over the road. Thanks, mate! Phone Roy to warn him. He buys one, but is not stopped.

1445 Leyland and camper sail from Calais, with another meal in the truckers' restaurant.

1615 Jubilee Way, Dover. Stop at the filling station for Katy to check on dropping part of her load at Gillingham today. Not on, so she will take B&B to drop early tomorrow. Roy phones. His plans have changed as Maureen (his wife) has not been let out of hospital today. Agrees to meet Katy at layby on A2. Katy stops at layby, the others in the camper push on for Horsham.

1900ish Horsham. Drop Manda at Andy's house, then Bill at Terry Clark's. Terry has been looking after Bill's car during the trip. Tony and Brian drive on to Burgess Hill.

1945ish Calais. Roy and Sue in the artic set sail for Dover.

2000ish Burgess Hill. The camper has now covered some 3200 miles. Sheila arrives to collect Brian, who is enjoying a decent cup of tea made by Val.

2115 Dover. All now safely back in the UK. Roy drives to rendezvous with Katy, while Sue collects Katy's car from the compound for the return drive to Seaford. But it wasn't the police compound, just a public parking space. Result - badly scratched door. That makes four vehicles damaged so far.

We did get together again a few weeks later to mull over our thoughts and impressions. Naturally, we all had different memories, but the one thing we all remembered was the young girl smiling as she held her mother's hand and, with the other arm, clutched her new teddy bear as we drove away. 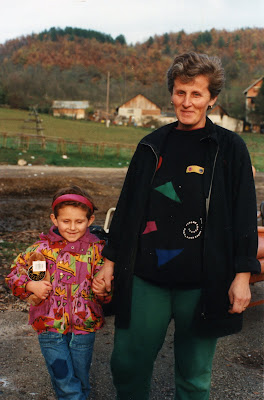 (not necessarily your) Uncle Skip, said...

Those smiles are the payment we receive as Lions for doing what we do.

And they're worth the effort!