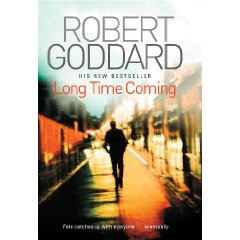 I have said before that my favourite author is Robert Goddard. His plots have so many twists and turns that reading one of his books is a little like walking through a maze: I stand in awe of his imagination. Because of this, I usually like to read his books in fairly large chinks at a sitting rather than just three of four pages at a time. Unfortunately, I was unable to do this with his latest book, Long Time Coming, and I am almost certain that I missed out because of this. A second reading will be needed before too long.

Long Time Coming is set in two times and three places - Dublin in 1940 and London and Antwerp in 1976 - with a final chapter set in 2008 to bring the loose ends together. Stephen Swan has always understood his uncle to be dead when in fact he has served 36 years in an Irish prison. Before his imprisonment his life had been rather flamboyant and involved with some dubious characters who have come back to haunt him following his release. Stephen, at a loose end having just left his job, agrees to help his uncle unravel the mystery.

As with all Goddard's books, this one most definitely rates five stars.
Posted by Brighton Pensioner at 09:53